"A World without Walls": Opportunities for Peace Building in a Time of Global Insecurity" 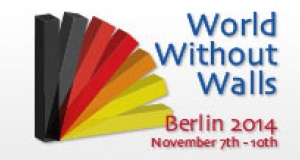 The Annual Conference on Cultural Diplomacy is the world’s leading event within its field and traditionally hosted and organized by the Institute for Cultural Diplomacy and other leading organisations at the end of the calendar year. The 2014 Annual Conference on Cultural Diplomacy will be held in the framework of the Berlin celebrations of the 25th Anniversary for the fall of the Berlin Wall. This year’s conference is titled „World Without Walls„ to emphasize the great changes that took place in the wake of the fall of the Berlin Wall and to symbolize the many political, economic and cultural walls that still exist in today’s society. This year’s conference will focus on these boundaries and issues.

The fall of the Berlin Wall in 1989 was a historic catalyst that led to a change in the world’s political, economic and cultural landscape. In the tumultuous aftermath, Eastern Europe witnessed the emergence of dozens of states which led to today’s European Union. The events in Berlin also brought transformation to other parts of the world very far from the Berlin Wall, including regions as far afield as Africa and Asia, and also laid the groundwork for the world we experience today.

The 2014 event will include large-scale events dedicated to the fields of international relations and economics peace building, human rights, arts and culture. The conference curriculum will include a broad range of topics of discussion and will also focus on specific areas within the field of Cultural Diplomacy in order to provide a wide and detailed analysis of Cultural Diplomacy for 2014. Through discussion, lectures and analysis the event will highlight the urgent need to campaign for a world without walls.

Based in Berlin, the conference will be hosted at a number of important political, historic, and cultural locations across the city.

The 2014 conference will bring together over 300 world leaders coming from the fields of politics and religious together with senior academics and celebrated artists travelling to Berlin from all corners of the world to promote global peace in our interdependent world.

Participation in the conference is open to governmental & diplomatic officials, academics, artists, journalists, civil society practitioners, private sector representatives, young professionals and students as well as other interested individuals from across the world.

All conference participants will be awarded an official certificate of attendance upon completion of the program, which will provide details of the speakers who took part and the topics discussed. Each certificate will be signed by members of the Conference Committee.