Announcing the First Winner of the Dragan Klaić Lecturer Award 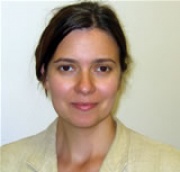 Initiated by the UNESCO Chair in Cultural Policy and Management at the University of Arts in Belgrade, the Dragan Klaić Fellowship Program is presented in memory of Prof. Dragan Klaić, PhD, theater scholar and cultural analyst. Supported by the Open Society Foundations and the European Cultural Foundation, it consists of 2 initiatives – Dragan Klaić Fellowship (student scholarship) and Dragan Klaić Lecturer (professor award), both given annually in order to contribute to the creation of a centre of excellence and attract the best students and professors to the UNESCO Chair in Cultural Policy and Management. This interdisciplinary master study program is organized in cooperation with the Université Lumière Lyon 2 (France) and taught in English and French. For promoting international cultural cooperation, intercultural dialogue and mediation in the Balkans, the program received the UNESCO Chair title in 2004.

Her research interest in the avant-garde and in theatre theory has resulted in the book Theatre of Estrangement: Theory, Practice, Ideology (University of Toronto Press, 2006) that focuses on the notion of making the familiar strange in Russian Formalism, Russian avant-garde and in Brecht. She has also published articles related to some aspects of this subject in New Theatre Quarterly, Contemporary Theatre Review, Substance, and Balagan. This strain of her research has continued in her more recent work on semiotics of performance and urban spaces.

The other important area of Silvija Jestrović’s research concerns issues of performance and exile including identity, space and language. Her most recent work on exile includes the article “Performing Like an Asylum Seeker: Paradoxes of Hyper-Authenticity” (RIDE, 2008) and the co-edited monograph (with Y. Meerzon) Performance, Exile, ‘America’ (Palgrave, 2009). Her latest book is entitled Performance, Space, Utopia: Cities of War, Cities of Exile (Palgrave, 2012). The book is a culmination of a substantial period of AHRC funded research and it combines her interest in cities, exile, radical political performance, and critical theory. It deals with issues and theories of space, identity, community, and the trope of exile in two contexts of crises: the political oppression in Belgrade and the war in Sarajevo during the 1990s.

"Seeing Better: The Modernist Legacy and its Transformations", ALT Theatre: Culture and Diversity on Stage. Vol 8, no.3, March 2011 pp 18-23

“Uncle Vanya After Theatre of the Absurd,” Toronto Slavic Quarterly. No. 4 (Spring 2003) Available:http://www.utoronto.ca/tsq/04/Jestrović04.shtml

“Theatricality as Estrangement of Art and Life in the Russian Avant-garde,” SubStance: A Review of Theory and Literary Criticism. University of Wisconsin Press, vol. 31 no.2&3 (2002): 42-57

Dragan Klaić was a theater scholar and cultural analyst. He served as a Permanent Fellow of Felix Meritis Foundation in Amsterdam and taught Arts and Cultural Policy at the University of Leiden. He obtained a degree in Dramaturgy in Belgrade and a Doctorate in Theater History and Dramatic Criticism from Yale University. Klaić worked as a theater critic and dramaturge, held professorships at the University of Arts in Belgrade and University of Amsterdam, guest professorships in the USA, at the CEU Budapest and University of Bologna, led the Theater Instituut Nederland, co-founded the European Theater Quarterly Euromaske, and served as the President of the European Network of Information Centers for the Performing Arts and of the European Forum for the Arts and Heritage. His fields of engagement were contemporary performing arts, European cultural policies, strategies of cultural development and international cultural cooperation, interculturalism and cultural memory. He led complex international research projects, conceptualized numerous conferences and symposia, authored and edited publications. Klaić is the author of several books and hundreds of articles. He was the Chair of the European Festival Research Project. Dragan Klaić passed away in August 2011.