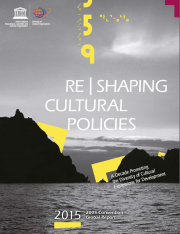 The launch of the first UNESCO Global Report on the Monitoring of the 2005 Convention on the Protection and Promotion of the Diversity of Cultural Expressions took place at UNESCO on 16 December. Ten years after its adoption, the Report investigates the policy impact of the Convention, now ratified by 141 Parties.

The event took place at 10:00 am, Wednesday 16 December at UNESCO HQ in Paris in Room II.

Irina Bokova, Director-General of UNESCO, launched the first Global Report to monitor the implementation of the 2005 Convention, entitled “Re|Shaping Cultural Policies. A Decade Promoting the Diversity of Cultural expressions for Development”.

At the launch event, a panel of high level guests, including Karima Bennoune, United Nations Special Rapporteur in the Field of Cultural Rights; Per Olsson Fridh, State Secretary to the Minister of Culture of Sweden and Pascal Lamy, former Director-General of the World Trade Organization, as well as contributing authors to the Report, debated key findings in the report.

These findings are related to the following areas; sustainable systems of governance for culture, the trade and flows of cultural goods and services, mobility of artists and cultural professionals, integrating culture in sustainable development frameworks and promoting human rights and fundamental freedoms.