He has received two Rector’s plaques for the success achieved during the studies. He is a Fellow of the National Theatre in Tuzla and has so far played in projects in Tuzla, Sarajevo, Zenica and Italian theaters.

As an associate lecturer, he hold lectures at the Study Department of Cultural Studies, Faculty of Philosophy, University of Zenica.

As a manager and production assistant on television, Hazim Begagić has implemented a number of projects.

He is a member of the City Council for Cultural Forum Zenica and stakeholders of the University of Zenica. In front of the State Agency for Higher Education BiH he was hired as an expert for the external evaluation of universities in BiH .

He received an award by the European Association of Managers of BiH for outstanding contribution to the development of cultural management in BiH.

From 2010, Hazim Begagić has been the Managing Director of the Bosnian National Theatre in Zenica. 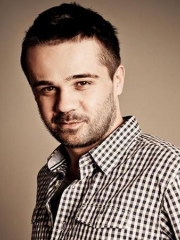