Faculty of Drama Arts in Cetinje

Edin Jašarović graduated from the Faculty of Dramatic Arts in Cetinje - department for the production. Within the specialization, he completed the course Contemporary Theatre Management L`Aquila - Italy within the project AR.CO (Artistic Connection) "Per una rete dei theaters Adriatica", INTERREG IIIA Adriatic Cross -border Programme Community. As the first ranked on the course, he received the scholarship of the Italian region of Puglia for 2004.

In 2009 he graduated from the Interdisciplinary MA studies of Cultural policy and cultural management at the University of Arts in Belgrade.

Currently, he is a PhD student of Management of the Arts and Media at the Faculty of Dramatic Arts, University of Arts in Belgrade.

He was a lecturer at the International Forum Sostenuto - READY TO CHANGE? - Thinking culture as a factor of economic and social innovation, 2-4 December 2010, Ljubljana.

From 2011 to 2013 he was a researcher on the project: Evaluation of cultural policies and EU funded programs as promoters of cultural diversity and intercultural dialogue in the Balkans / SEE. PAC Multimedia, Macedonia. 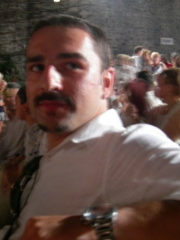