Inga Tomić-Koludrović is a Head of Department of Sociology, University of Zadar and President of Croatian Sociological Association. 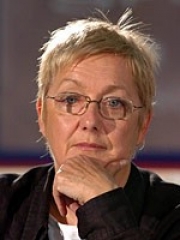