Lea Linin is a junior researcher and assistant project manager at PAC Multimedia, Skopje, conducting the research as part of a regional research project entitled Evaluation of Cultural Policies and EU Funded Programs as Promoters of Cultural Diversity and Intercultural Dialogue in the Balkans/Southeast Europe (SEE). She is also an assistant project manager in the Interethnic Integration in Education Project (IIEP).

She graduated from the Ss. Cyril and Methodius University in Skopje in 2009 (Bachelor of Arts in Translation and Interpreting; major: English, minor: German), and from the University of Arts in Belgrade in 2012 - the UNESCO Chair in Cultural Policy and Management - joint interdisciplinary master study program organized with the Université Lumière Lyon 2. She also finished an online training course for teachers of English in 2011 (British Council, Skopje) and an online training Node – Center for Curatorial Studies, Berlin in 2012.

She has participated in numerous different conferences and workshops, such as: 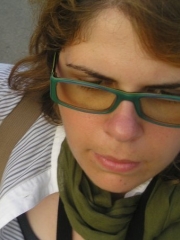